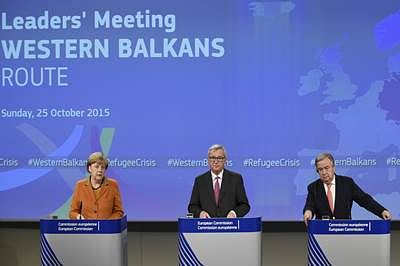 Last weekend’s meeting in Brussels of 11 of the European Union’s 28 member nations and the outcome of Poland’s general election both suggest that the generous welcome to Asian migrants (highlighted by the German chancellor, Angela Merkel) may be wearing thin. In fact, as hundreds of thousands of Syrians, Afghans and Pakistanis surge across the Dardanelles, Europe is beginning to reveal the race bias that underlies compassion.

Let there be no mistake,the crisis is largely of the making of the Western powers and their Asian surrogates. They accuse Syria’s President Bashir al-Assad of being undemocratic and repressive, and extend moral, political and military support to an armed rebellion against his authority. When the Syrian government hits back, it is accused of brutality. The parallel that comes to mind is of foreign powers supporting the Naga insurrection or the Uighurs in China’s Xinjiang province. While the United States, Saudi Arabia, Qatar and some other Gulf states support the Syrian rebels, Russia’s Vladimir Putin has gone to Mr Assad’s rescue with missile attacks against the infamous Islamic State which is also engaged against the Damascus government.

The resultant civil war has already displaced eight million Syrians within the country, forced some three million to flee to Turkey, another million to Lebanon, and sent 670,000 refugees to Europe. Greece was overwhelmed by a flood of 56,000 in just six days. In the circumstances it isn’t difficult to understand the upsurge of German support for the Pegida (Patriotic Europeans Against the Islamisation of the West) movement which was able to mobilise 20,000 people in Dresden.

Pegida supporters have marched through the streets carrying wooden gallows with nooses “reserved” for Ms Merkel and her deputy. According to Bild, Germany’s biggest tabloid newspaper, a group of German MPs are planning to erect a fence around the country’s eastern border. Germany expects up to a million asylum seekers this year but even the interior minister, Thomas de Maiziere, a liberal who condemns hate crimes, wants the EU to announce a finite number of migrants and send the rest back to a safe country in their home regions.

The election victory of Poland’s Conservative Catholic Law and Justice Party must be seen in this context. The party is known to be Eurosceptic and anti-migrant. Its election campaign included references to “disease-ridden migrants”. Yet it has won 39 per cent of the vote and formed a government in Warsaw. The British are similarly indifferent to the EU. While David Cameron gives the impression that the migrant crisis is a Continental affair that doesn’t affect the British Isles, right-wing newspapers like the Daily Express blow up reports of supposed migrants being involved in narcotics and in sexual assaults on women.

Yet, to be fair to Europe, the immediate compelling motive for the Brussels meeting was to ensure that as many refugees as possible are settled before a Balkan winter sets in with minus 15 degrees Celsius temperatures and frozen rivers. The tramping thousands have no warm clothes, no medicines and little guarantee of protection. But only eight of the 28 EU countries responded to the call for emergency equipment and experts. With the EU commissioner warning that 20 million displaced men, women and children may be waiting in the backyard, the challenge has reached grim proportions.

Things took an ominous turn when Hungary’s rightwing government erected a 41-km barbed-wire barrier along part of its frontier with Croatia, the remaining 330 km of the border running roughly along a river which is difficult to cross. This supplemented the barbed-wire fence Hungary recently completed along its frontier with Serbia, backed with laws to jail illegal migrants. Hungary is said to be shipping thousands of people to the Austrian border; thousands more who can no longer enter Hungary have been diverted to Slovenia whose border with Austria is still open. The Slovenes complain that a tiny country of only two million people can’t cope with a flood of 12,000 refugees every day.

It’s a tragic pilgrimage – yet one that also proclaims hope – of refugees from Syria leaving Turkey to cross the Dardanelles in dinghies and then walking through Greece and Macedonia to Croatia. Previously, they transited Hungary. Now, Slovenia offers the only path to survival for it borders Austria which received more than 20,000 refugees in September alone. Although there are complaints of Austrian refugee camps being crowded and unsanitary and of Austria “outsourcing” the problem by sending some refugees to temporary centres in Slovakia, it is the only road to desired destinations in Germany and Sweden.

But many more will perish like the 71 people (four children and 67 adults) whose putrefying bodies were discovered in a meat truck without ventilation on the Austria-Hungary border before the journey ends. Or the 63 refugees who perished when their boat hit the rocks off the Greek island of Lesbos. Another 43 were drowned off the coast of Libya. Some 3,000 migrants are stranded in Calais waiting to cross the English Channel into Britain. Mr Cameron refuses to let them in, presumably convinced thousands more will follow. The Institute of Migrants calculated that more than 650,000 Asians and Africans reached Europe by sea this year. Countless others were drowned in the Mediterranean.

Many fear that the real lesson of the crisis is that the EU lacks the will and strength to cope with a serious challenge. Europe’s biggest flow of humanity since 1945 has reawakened all the old ethnic rivalries of pre-EU Europe. Slovenian riot police have forced hundreds of refugee families back into Croatia. A neo-Nazi anti-migrant fanatic recently stabbed Henriette Reker, a pro-migrant German politician and mayoral candidate for Cologne. Not only did Ms Reker recover from the attack but she won the election.

But the incident jolted opinion throughout Europe. “In Germany we’ve had 179 right-wing extremist killings since 1990, there have been more than 500 hate crimes against asylum housing, and now there’s the same phenomenon of lone-wolf terrorism that we observe on the Islamist terrorist scene,” observed Professor Andreas Zack of Bielefeld University, an expert on violence and conflict. Fears are expressed about the rise of the fascist right, and questions asked about the fate of the Schengen agreement for borderless travel within the 28-nation bloc.

The immediate concern is for saving the migrants. Last weekend’s EU meeting adopted a 17-point charter that includes setting up reception centres for 100,000 migrants and posting 400 border guards to Slovenia. Austria’s chancellor, Werner Faymann, and Slovenia’s prime minister, Miro Cerar, both warned in Brussels that the EU was in danger of collapsing. It will do so without doubt if it fails to rise to the challenge that confronts Europe and to provide a solution that takes care of suffering humanity within the framework of Europe’s national sovereignty.