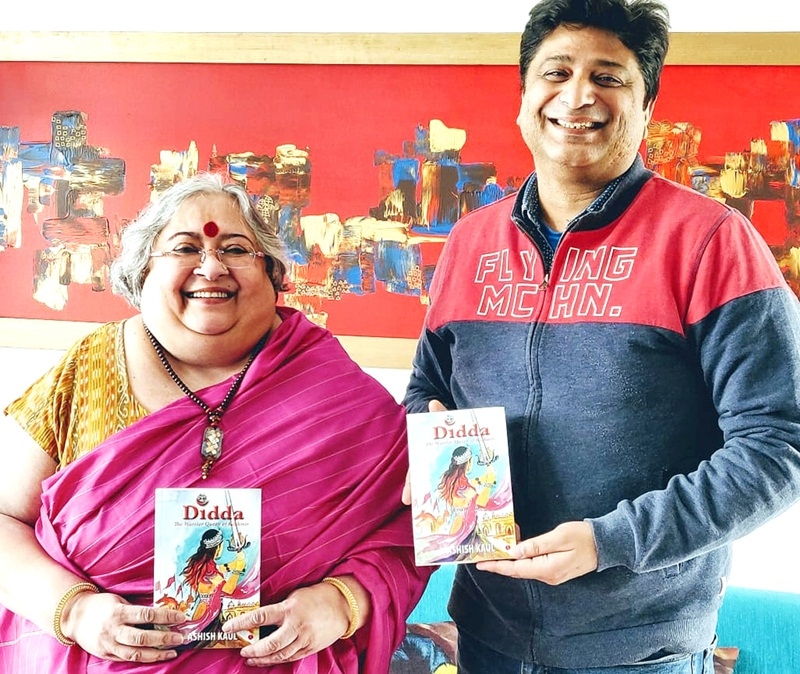 Till Ashish Kaul’s ‘Didda: The Warrior Queen Of Kashmir’ landed on the desk, one did not know much about this wonderful character from Indian history, and that’s a shame. When great Indian heroines are mentioned, only the Rani Of Jhansi comes immediately to mind. The contribution of women, is mostly ignored, maybe because history is written by men.

The women who make it to stories, written or oral, are the ones romantically linked to a king—Padmavati, Mastani, Mrignayanee, Mumtaz Mahal, Noorjehan (even though this queen ruled in place of the dissolute Emperor Jehangir). There are some names that vaguely pop up—Razia Sultan, Begum Hazrat Mahal and Chand Bibi, but there must have been dozens of others who have been forgotten.

Even when it comes to contemporary history, there are a few accounts of the women involved with the freedom movement, but it’s only now the stories of women who contributed to the Indian Constitution, science, literature, cinema, the space mission (Bollywood has discovered the exciting potential of this story and a film called Mission Mangal, starring Vidya Balan is reportedly underway) are coming out.

Kaul’s book is a bit overdramatic and has melodramatic scenes like Didda’s confrontation with a tiger, but that does not take away from her significant place in Kashmiri and Indian history. She ruled at a time -958-1003- when women were locked away in zenanas, and not even given an education, leave aside fighting skills. There were no great female role models either.

It must have required courage and cunning to rule in a palace full of hostile men, not to mention a certain ruthlessness. For instance, when her husband, the much older and debauched King Kshemagupta, died, she calmly allowed his first wife to commit sati, and when it was her turn to climb the pyre, told the prime minister, who was eyeing the throne, that a man who could not protect his own daughter and watched her die, was not capable of looking after the interests of her son Abhimanyu; she went back to the palace and took charge of the kingdom.

For forty-four years she quelled rebellions, fended off enemies—internal and external—and apparently even killed her grandsons to hold on to power and protect her kingdom. (There are coins of that period, issued by her in existence.)

What makes her achievements even more extraordinary is that she was born with a disability, due to which her father, Simharaja, the King of Lohara, actually wanted to kill her. He spared her life, but her parents neglected her, throwing her to the ridicule of other kids. It was her maid Valaga—a formidable woman of African origin— who raised her to be strong and fearless.

According to a summary of Kaul’s book, “This is the story of Rani Didda, the forgotten Hindu queen of undivided Kashmir. History is often unkind and cruel to women, especially women who wield power. Trampled by wars and religious crusades, lies hidden the story of a glorious woman who was considered a harbinger of bad times when she was born but went on to become a legendary warrior- the saviour of Shrinagaram, the capital city of Kashmir.

Didda: The Warrior Queen of Kashmir is the untold story of a woman’s rise to power during the tenth century. The legend of Didda is entwined with a life of solitary struggles against prejudice and patriarchy. She eventually went on to rule the unified Kashmir encompassing the Lohar Kingdom and Kashmir for a period of forty-four years, taking it to glorious heights and making it the most powerful kingdom in mediaeval Asia. The foundation laid by Didda helped Kashmir defeat the dreaded warlord Mahmud of Ghaznavi, twice.”

Twelfth century chronicler Kalhana, whose work, Rajatarangini narrates the story of Didda among other historical accounts, paints her as brutal and amoral, but also a capable ruler, and such a big influence on her husband that he came to be known as Didda-Kshema. She is said to have many lovers, including a Gujjar shepherd called Tunga, whom she brought into the kingdom as her prime minister. Even the otherwise disapproving Kalhana wrote of Didda, “The lame queen whom no one had thought capable of stepping over a cow’s footprint got over the host of her enemies just as Hanuman got over the ocean.”

Men called her a witch, but historian, archaeologist and scholar, Mark Aurel Stein wrote, “The statesmanlike instinct and political ability which we must ascribe to Didda in spite of all the defects of her character, are attested by the fact that she remained to the last in peaceful possession of the Kashmir throne, and was able to bequeath it to her family in undisputed possession.”

Left with no direct descendants, she chose Samgramaraja, her brother Udayaraja’s eldest son to be her heir in Kashmir, and founded the Lohara Dynasty. Why is Rani Didda not better known? Or Rani Abbakka Devi? Rani Rudrama Devi? Rani Tarabai? Not to mention the thousands of women not from royal families -writers, poets, social reformers, rebels- who shaped the country in their own way. Maybe it is time to take another look at our history and give women achievers their rightful place.

Deepa Gahlot is a Mumbai based columnist, critic and author.