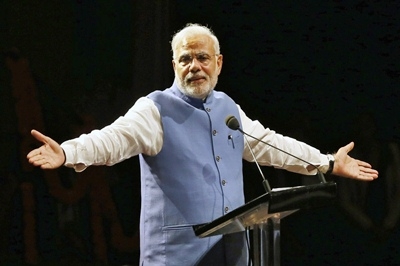 By now I am entirely convinced that Prime Minister Narendra Modi has a mischievous streak that is visible in private conversations but occasionally surfaces in public. He just loves needling opponents, particularly those who have an inflated sense of their own self-worth.

His aside in Dublin on hearing Irish children sing a Sanskrit hymn in his honour was sharp and calculated to hit home. Modi raised a simple question: would such an act in India not have driven the secularists crazy? Regardless of all those pious interventions on Twitter by people proclaiming the secular-cum-Sanskrit credentials of their grandfather and daughter, the fact remains that the controlling interest in the secularism industry belongs to those who believe that Sanskrit equals Hindutva and that learning it is the prerogative of those socially ‘backward’ guys who attend shakhas. To them, the celebration of Sanskrit is the personification of anti-modernity.

Of course not every secularist is so utterly crass; but the average ‘Hindu’ secularist—the type who believe that the natural destiny of every successful child is to settle down in the US—has a supercilious view of India’s Hindu ‘mumbo-jumbo’. In the old days, particularly during the heady Ayodhya years, their refrain used to be: what will the world think?’ Today, it’s more what will their Facebook friends think?

Don’t get me wrong, the secularist who laments that her son is forced to read Sanskrit as an obligatory third language—albeit ‘high scoring’—rather than French, German or even Mandarin, isn’t a Hindu hater. Rather, she doesn’t see herself as one. But given half a chance she would say she is a ‘ceremonial Hindu’—someone who perfunctorily observes some elementary rituals on Diwali or Onam or Durga Puja, and puts a sari on some special day in anticipation of Facebook ‘likes’.

Such people are uber-liberal: they hate the idea of prohibition, even on Gandhi Jayanti and, particularly, voting day; they can’t countenance meat bans—although many will discreetly admit that they grew up as vegetarians and, in any case, find the idea of beef a bit much to digest; and they embrace the idea of modernity which, in their value system, implies the values endorsed by the New York Times or its bastard progenies in India.

For them there is another world outside the echo chamber that is inhabited by the ‘Other’ –yes, even the liberals have their ‘Other’. But that world is unknown and incomprehensible.

Many years ago I met a well-meaning engineer who had returned to India after 30 years of working with a well-known company in Texas. He told me that he was convinced that George W. Bush had stolen the presidential election from Al Gore. What had prompted this amazing conclusion was not the Florida recount but the fact that he hadn’t met a single American who had voted for Bush. That he lived in Texas, Bush’s home turf, didn’t seem to bother him.

Likewise, there are people who proudly proclaimed during the 2014 general election that they didn’t know anyone who intended to vote Modi. For them, Modi supporters occupied a separate universe. At best the Modi bhakt was like the proverbial Pandey ji who taught Hindi and Sanskrit in English-medium schools and who, invariably, was the butt of jokes that reeked of social condescension.

Last week on Twitter, Heeraman Tiwari, an Oxford-educated Sanskritist teaching in JNU wrote: “A celeb… economist once told me in my face: ‘refreshing to see a Sanskritist so liberal in your views.’” I don’t think Tiwari was exaggerating. As someone favourably disposed towards the Prime Minister and his political assumptions, I have often observed the incredulousness in the faces of liberals upon realising that I come from the same social background as many of them and, indeed, can eat with a fork and knife.

In the autumn issue of Spectator Life, conservative right-wing writer Douglas Murray has a wonderful article on the perils of being on the ‘wrong’ side of a Left-wing dominated media. “Certain (TV) presenters”, he observed, “behave as though their entire stack of liberal credentials are at stake. Newsnight’s Kirsty Wark is an example of this phenomenon, striking a weird, flared-up nostrils, ‘What horrible smell has come before me?’ pose before even asking the first question…Here we get reminded of one of the great truisms of politics: while the right tend to think the left are misguided, we rarely think they are evil. The favour is not returned…”

This may explain the intense prejudice the left-liberals harbour against not only Sanskrit but also the whole gamut of cultural nationalism. In the past three days, in response to Modi’s jibe in Ireland, a large number of media liberals have gone on record to say that they are not against Sanskrit but only its contrived association with saffron politics. I wish that were indeed the case. In 1998, at a conference of education ministers, the same lot created a stink when it was announced the proceedings would open with a rendering of the Saraswati vandana—a celebration of the goddess of learning.

Many classical languages, including Sanskrit, have an overweight of religious literature just as many Indian dance forms have an association with temple worship. To try and forcibly de-sacralise and secularise the inheritance is an ideological exercise that needn’t be appreciated. One of the pedagogic shortcomings of Sanskrit learning in schools is the attempt to cast it in a modern functional mould. The sacred dimensions of Sanskrit—important to both believers and non-believers—has been bowdlerised, with disastrous consequences.

Modi’s observation may have been in passing but even unintentionally he touched a raw secularist nerve. The outrage of the minusculity wasn’t triggered by any falsehood but because what the PM said was indeed true of those who want to be arbiters of good taste.