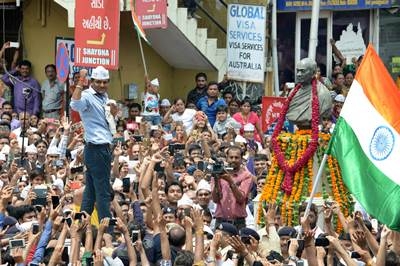 The Hardik Patel phenomenon seems to have caught everyone by surprise. That lakhs of Gujaratis should protest in unison all over the state at the command of someone who till a few weeks ago was little known outside his immediate circle of friends and relatives underscores the deep anxieties within the most dominant caste group in the State. Was the State Government and others who usually keep watch on the socio-economic undercurrents amiss in not observing the deep unrest just under the surface? Given that Gujarat was among the  relatively more developed States, and the Patels were one of  the  better- off caste-groups, it is all the more difficult to fathom the causes of the peaceful uprising against the current system of reservations. Whether what they seek is reservations for Patels or something else is not quite clear. After all, Hardik and his associates are barely out of their teens and are unable to enunciate their cause in clear, unambiguous terms. But one thing is clear. Their anger is against the present system of reservations which leaves them out in the cold when it comes to sharing in the economic opportunities created by the present system of governance.

The hurriedly assembled Patidar Anamat Andolan, led by Hardik, has channeled the growing frustrations and pessimism of the community. It is notable that the recent Patidar rally in Ahmedabad which drew national attention was dominated by diamond workers from Surat. The slowdown in the diamond polishing industry has resulted in tens of thousands of workers being rendered jobless. Others fear a sharp drop in incomes as the global slowdown causes thinner order-books and a pile-up of inventories. Reports from Surat speak of tens of thousands of workers being laid off, others being forced to take hefty cuts in take-home packages. Big importers of polished diamonds, China and Russia, are particularly in the grip of an economic slowdown, resulting in lower orders for Surat. Indeed, the Surat diamond polishing industry fears a 20 to 25 percent drop in business during the peak Diwali – Christmas festive season. In other words, the Surat slowdown and layoffs have fuelled the Patidar protest against the current reservations. Since the global economy is unlikely to pick up momentum anytime soon, given the continuing woes of the Chinese and the Europeans, the diamond processing industry in Surat will have to take a big hit. Incomes of lakhs of workers will shrink while more will find themselves out of work.

By channeling these anxieties, Hardik has emerged as a key rallying point for the Patels and others. Feeling threatened for want of economic opportunities, though highly industrialised Gujarat offers few job opportunities for the unskilled workers who join the army of unemployed every year. Resentment against the reservation system which denies them jobs in government and semi-government organisations is a natural corollary of such a bleak economic scenario. Admittedly, the divisions in the ruling party in Gujarat and the weak leadership of Chief Minister Anandiben Patel too have further complicated the picture. The challenge posed by Hardik could have been better handled had there been a more accomplished CM. In fact, the anti-Modi, anti-BJP elements who were lying low all these years had hoped to exploit the Hardik phenomenon to regain relevance.

Unfortunately for them, Hardik’s own confused stand and his pro-Hindutva utterances have forced these elements to steer clear of him. It is notable that after fully welcoming the Hardik protests, the leaders of the so-called grand alliance in Bihar backed off once he took an anti-reservation position and proclaimed his respect for the late Shiv Sena founder Balasaheb  Thackeray. It is a reflection of the overnight Hardik phenomenon that the Patels are playing hide and seek with the ruling party, one moment threatening to protest the presence of Modi in the US and another promising to welcome him. In short, Hardik reflects the current state of confusion and pessimism among the country’s youths who are grappling for opportunities in a shrinking job market. Traditional vocations such as agriculture can barely support the growing number of claimants on the shrinking land holdings, while the alternative employment avenues are further blocked due to caste reservations. Ultimately, the Hardik phenomenon is a call for a re-look at the entire gamut of caste reservations.