NJAC 2015: Judiciary’s cry before the executive 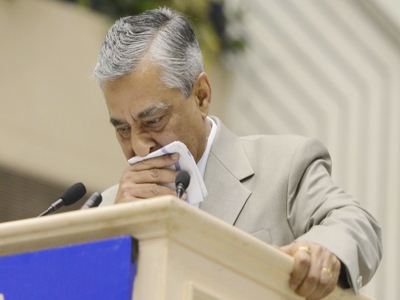 The proposed closed-door meeting between the Supreme Court judges and Union ministers to reduce the mounting backlog of cases is unique in the annals of the Indian judiciary, because this is the first time such a meeting will take place. The Supreme Court struck down the National Judicial Appointments Commission Act (NJAC), 2015 because it curtailed judicial independence while one year later, CJI T.S. Thakur wept before Prime Minister Narendra Modi for allegedly not clearing 169 names for high court judgeship.

Not stage-managed, for the benefit of 90-year-old litigants like P.C.Singhi who fought a 28-year-old battle against a famous oncologist who was exonerated on charges of medical negligence by the apex court. Singhi now awaits death which for him will mean justice at last. There are millions of Singhis lost in India’s labyrinthine court corridors.

But in this teary-eyed business, we forget the judiciary has a powerful weapon which it can use against the Executive. That weapon is the power to issue a contempt notice to any cabinet minister or secretary, if he ignores the apex court’s directions. But the CJI has never used the contempt weapon against the Executive.

There have been several PILs filed seeking filling of vacancies in the high courts, but a meek apology by an IAS officer and a dressing down in open court purges the contempt. This is because judicial independence is a theoretical concept. All judges are paid by the state although they are not its employees.

High Court judges are paid Rs 80,000 per month while Supreme Court judges and chief justices of the 24 high courts get Rs 90,000 per month with the CJI drawing Rs 100,000 per month.  But there are plenty of post-retirement perks. Judges like Justice Ajit Shah, who was not elevated to the Supreme Court, head law commissions or tribunals where they continue to earn well after crossing 65 years of age. Even docile judges of the 24 high courts head arbitral tribunals where they charge hefty reading fees.

Be that as it may, the Indian judiciary neither denies justice to over 3 crore litigants nor does it deliver justice rapidly. It chooses to bury justice with the bodies of those who litigate so their descendants are left to execute a decree 50 years later — at the earliest. We need 40,000 judges or 50 judges per 10,00,000 population, as per a 1987 report of the Law Commission of India with the average disposal rate of Indian judges being 2600 cases per year unlike the 81 cases per year disposed off by the U.S. Supreme Court where all judges sit together. Whether those 2600 cases disposed off are orders or final judgments is unclear because a high court judge is expected to dispose of 600 cases per year.

Apart from inadequate judge strength, experience has shown that the system of judges appointing judges is imperfect with the latest case of Justice Gyan Sudha Misra of the Supreme Court who listed two unmarried daughters under the liability column on the official website of the Supreme Court. This prompted a national daily to publish a news report on this absurd spectacle. She was always late in attending court and Wikipedia has alleged her court was notorious for “forum shopping” by builders although she claimed at her farewell function that she delivered “quality justice.”

But all that is set to change with the latest Memorandum of Procedure making “merit and integrity” a vital qualification for elevation as a Supreme Court judge. Neither merit nor integrity were explicitly stated earlier which may explain why judges like former CJI K.G. Balakrishnan were accused by his colleague, former Supreme Court judge H.L. Gokhale of misrepresenting facts to shield telecom accused A.Raja who allegedly tried to influence Madras high court judge R. Reghupathy on behalf of two murder accused.