The government talks about strengthening the manufacturing backbone of India. Slogans of ‘Make in India’ continue to rent the air. Everyone talks about how this is to be achieved. But the core issue is forgotten.  Manufacturing does not enthral the youth any more. The biggest lure for young people is to get jobs in finance companies – banks, hedge funds, investment firms or even brokerages.  The second option is to get into the information technology (IT) sector.

In fact, this was visible to many a long time ago.  The drift of the brightest students – even from the IITs – to the finance sector has been much in evidence (http:// www.asiaconverge. com/2014/10/iits-and-the-seduction-of-finance/). The result is misapplied subsidies. The government subsidises fees for students opting for engineering. But many students opt for MBA degrees after completing their engineering. Then they begin working for finance sector companies.  Thus, the country loses both the subsidy amount, and the student who was supposed to make manufacturing vibrant. This is worsened by a corporate culture that pays manufacturing sector employees very little. 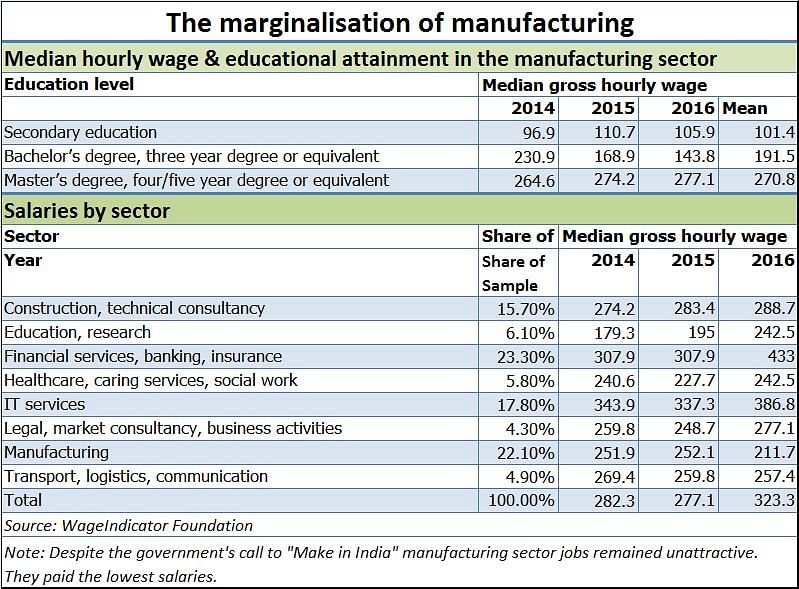 But why blame students?  The government is the guilty party here. It has encouraged managements to pay finance graduates more, and allowed promoters of companies to earn several times the median salaries of workers. In 2014 the corporate top brass got paid around 78 times the median salary (http://www.asiaconverge.com/2014/04/indias-great-wage-divide-ceo-vs-labour/).  Even today, the government continues to allow banks to pay their key officials a lot more than what manufacturing companies pay (https://www.outlookindia.com/magazine/story/then-a-mundhra-now-a-mallya/299122).

Expectedly, the BFSI (Banking, financial services and insurance) sector paid the highest median salary on an hourly basis.  It offered Rs.433, double that of the manufacturing sector.  The IT sector paid Rs.386.8.  Even the healthcare, caring services and the social work sectors paid Rs.242.5. The education sector (which was once the worst paid sector) offered Rs.204.1.

Much of the number crunching for compiling this data has been done by WageIndicator Foundation (www.wageindicator.org). Headquartered in the Netherlands (and with an office in Ahmedabad), it collects, compares and shares labour market information through (online & face-to-face) surveys and desk research. It serves as an online library for wage information, labour law and career advice. It currently operates in 80 countries.

The findings ought to ring bells of alarm. They threaten to derail the prime minister’s mission of Make in India.  It must be noted that the share of manufacturing in India’s GDP is woefully low – at 16%.  The government wants to push up this share to 25% by 2025.  This will be difficult –  unless three things happen:

So how does the government achieve this?

There could be some simple ways.

First, the government could work out a system whereby a student would have to pay back the subsidies he has received for studies in engineering, if he does not work in the manufacturing sector for a specified period. This might be a bit tricky because the government is quite poor when it comes to data collation – except when it is for political purposes.  Such moves may also run afoul of Indian courts which may interpret them as restricting free mobility of a workforce, or preventing people the right to choose a vocation for themselves.  However, if the government is serious, it could craft appropriate legislation to allow targeted subsidies only for people who opt for manufacturing jobs for a specified period after graduation.

Second, as done in countries like Germany, the government could create a set of laws whereby salary disparities in any concern or industry would have to be vetted by labour representatives on company boards. There is an urgent need to reduce income disparities.  When promoters decide to give themselves huge salaries and perquisites they do two wrongs.  They cheat shareholders of money that could have reached them as dividends.  Plus, they exacerbate the management worker divide.  The difference between top salaries and median incomes needs to be rationalised.

Third, methods have to be found to ensure that top management of BFSI firms do not enrich themselves by paying themselves fat salaries (http://www.asiaconverge.com/2017/03/indian-banks-fatten-themselves/). What is sad is that both the RBI and the finance ministry have turned a blind eye to such practices.  This is where organisations like Moneylife (http://www.moneylife.in/), depositors forums and bank unions have been agitating for the need to rein in banks’ executive pay. Sadly, many bankers fatten themselves by imposing higher charges on helpless customers.  Making bank (and loan) account portability is one solution.  Legislative curbs would be another.

Unless the government works on all the three measures suggested above, India will see little of “Make in India”.  The disenchantment with manufacturing will push the country further into ever increasing imports on the one hand, and stultifying the creation of sustainable jobs on the other. A worrisome prospect indeed!