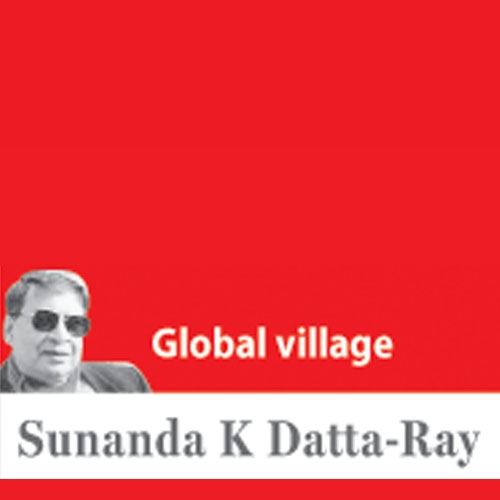 One of the most popular foreign guests at the junketing in Bangkok to celebrate the 60th anniversary of King Bhumibol Adulyadej of Thailand’s accession was Bhutan’s young and fresh-faced crown prince, now King Jigme Khesar Namgyal Wangchuck.  The irreverent whispered at the time that Thai adulation of the Bhutanese prince was intended to convey their disappointment with their own 62-year-old Crown Prince Vajiralongkorn whom they dared not criticise openly because of Thailand’s severe lèse-majesté laws.

Now, the prince himself has exposed himself to public scrutiny – and criticism – by making an issue of his perennial marital troubles. On December 10, he divorced the third wife, now stripped of all her honours and titles and officially known as plain “Miss Srirasmi Suwadee”, whom he married in 2001. The publicity that attended manipulated leaks about the lady’s sex life and the alleged greed of her corrupt relations didn’t speak well of Prince Vajiralongkorn’s maturity in making the initial choice. To make matters worse, Thailand’s controversial but powerful former prime minister, Thaksin Shinawatra, whom the royal family and military detest, and whose sister, Yingluck Shinawatra, was prime minister until May this year when she was toppled, is an important member of the dramatis personae in a murky plot. Bangkok is agog with reports that Vajiralongkorn has turned against his former ally, the exiled and fugitive Thaksin, in an attempt to secure influential support for his kingly heritage.

Obviously, all this deals a blow to the institution of monarchy. Moreover, if the security and stability of a key South-east Asian country is jeopardised, it could have repercussions on the Association of South-east Asian Nations and on India’s growing strategic and commercial interests in the region.

Thailand’s widely revered American-born 87-year-old King Bhumibol Adulyadej or Rama IX of Ayuthya occupies a position that can be compared to that of Japan’s late Emperor Hirohito. The American General Douglas MacArthur, Japan’s military governor after the Second World War, insisted that Hirohito retain the throne and not be blamed for the war or its excesses because he saw the emperor as a symbol of the continuity and cohesion of the Japanese people. MacArthur feared that without Hirohito, Japan might sink into chaos and anarchy. Nothing is ever done in Thailand except in the king’s name. Even when the military seize power, they do so as if on his behalf. It’s the only way of ensuring popular acceptance in a land where peasants still blame the king if the rains fail and their crops suffer.

But King Bhumibol, the world’s longest serving monarch, having ascended the throne in 1946, is terminally ill. No one says so for to admit his mortality is to peer into a dark unknown. But reports indicate he is suffering from Parkinson’s disease. A gall bladder surgery in early November may have left him weaker than before. Over the last few years, the king has been seen in public only in a wheelchair. He has not uttered a word in public, and only waved weakly at the crowds.

His ambitious and once-attractive wife, Queen Sirikit, also seems to be lying low. The rumour at one time was that their erudite second daughter, 59-year-old Maha Chakri Princess Sirindhorn, was the king’s favoured successor. He gave her the Maha Chakri title which Western observers interpreted as ‘crown princess.’ The princess is a regular visitor to India and has degrees in Sanskrit and Pali; she also teaches Thailand’s military cadets, regularly tours villages and has initiated many development projects. She would probably make a very worthy monarch, but Queen Sirikit was reportedly against setting aside the crown prince’s claims.  That is of only academic interest now for the princess is unmarried and expected to remain so. Even if she does inherit the throne, therefore, it will go to her brother and his children after her.

Which children is the moot point.  Srirasmi’s nine-year-old son, Dhipangkor, reportedly suffers from attention deficit hyperactivity which might exclude him from the succession. But the crown prince is believed to have fathered yet another son by a fourth wife or mistress, a former Royal Thai Airways hostess called Suthid, who lives in Munich where the prince visits her frequently. There is also his second wife, Yuvadhida Polpraserth. She, too, was a commoner but her former husband had her commissioned as a major in the Royal Thai Army and she participated in royal ceremonies. After he met Srirasmi, Yuvadhida was accused of adultery and driven out of Thailand. She lives in London with their four children who were stripped of their passports and royal dignities. Reports claim the crown prince had one of her daughters abducted from the United Kingdom and brought to Thailand where she is now recognised as a princess.

It seems difficult to associate a hard-headed politician like Thaksin with these frivolous shenanigans. But the former prime minister is also an astute tactician and a shrewd businessman, having made a huge fortune from the telecommunications giant he used to own. Supporting Vajiralongkorn with generous funds was his insurance against the future. Thaksin became prime minister in 2001 through the formidable rural-based vote-bank he had built up by using public welfare programmes. With his massive support among the poor, he marginalised the traditionally royalist Democrat Party, which eventually collaborated with the Thai army to oust him in a 2006 coup. A pliant judiciary then convicted him in absentia to two years in prison on a charge of improperly selling shares in his telecommunications company.

That was in 2008. This did not deter him. As a former policeman, Thaksin still enjoys extensive support in the police force. He staged an indirect comeback through his sister, Yingluck Shinawatra, who became Thailand’s first woman prime minister after fresh elections in 2011. Srirasmi’s fall coincides with the arrest of several of the kingdom’s most important and influential police officers, including Pongpat Chayaphan, an uncle of Srirasmi and the head of the corruption-ridden Central Investigation Bureau.

Thailand is a profoundly religious nation, 92 per cent of 62 million Thais being Buddhists. This is the highest percentage of Buddhists in any country in the world. Their Buddhism is also laced with Hinduism, and descendants of a small group of Brahmin priests taken from India many centuries ago still have a role to play in royal rituals. The nine-day Navaratri festival at the Sri Mariamman temple in the heart of Bangkok is a major national event.

These devout people are now praying fervently that their king be spared for as long as possible. For like the 18th century French king Louis XV and his mistress, King Bhumibol and Queen Sirikit might also feel entitled grimly to predict, ‘Apres nu le deluge … After us the deluge.’