Islam and Burra Sahibs in ’65 Pak 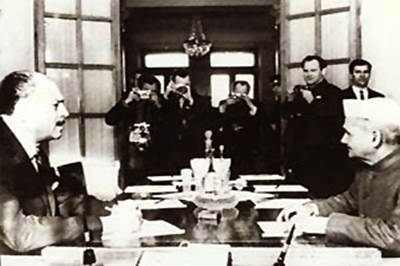 The Pakistan elite till the mid-seventies, when Gen Zia led the coup that overthrew Bhutto, was a combination of Islamic tendency and Burra Sahib behaviour. There is a small but significant question about the 1965 war that no one has asked and, therefore, no one has answered. Why did Pakistan codename the first part of its dual campaign after a small, rocky island off the coast of Spain and still in the possession of Britain? Why was the August 1965 assault, in which Pak-trained fighters posing fraudulently as “Kashmiris” attempted an insurrection in the Valley, called Operation Gibraltar? It seems odd, if not downright idiosyncratic. Except that it was not deception; it had a meaning that would resonate among militants in Pakistan.

Gibraltar begins life in history as the launch-pad of a Muslim Arab victory that changed the history of the world. Like so many Spanish place-names, it is a distortion of Arabic. The island was named by Arabs after Tariq ibn Ziyad defeated the Visigoth king Roderick, and laid the foundations of Muslim rule on the Iberian peninsula that would last till the middle of the next millennium. The Arab success was swift and stunning. As the iconic historian Edward Gibbon wrote in The History of the Decline and Fall of the Roman Empire, if the Arabs had moved west from west instead of turning east, Britain could well have fallen and minarets might have risen instead of spires in Oxford and Cambridge.

I cannot be very certain about the ambitions of General Ayub Khan, who was dictator of Pakistan then, since he was widely considered a realist, but the name certainly reflected the fantasies of his young foreign minister Zulfiqar Ali Bhutto, who was the principal architect of Pakistan’s invasion of Jammu and Kashmir in 1965. Perhaps Ayub Khan was a realist only in comparison to Bhutto. Even after the comprehensive defeat of Pakistan in 1971, Bhutto was still talking of a thousand-year war with India.

Pakistan activated a two-stage plan in the autumn of 1965. The first, through Operation Gibraltar, was designed as a mirror of 1947-48, when trained irregulars, commanded and accompanied by regulars and officers, were sent to create an alibi uprising. The second stage was called Operation Grand Slam, which was to be conducted by formal troops of the Pak army. After some tense fighting, both were reversed, and Pakistan ended up losing ground across the line and an international reputation for foolhardy failure that it has not quite erased. But is there a clue in the name of the second stage as well?

Yes. Grand Slam is, as everyone knows, a term from bridge: the ultimate contract, and therefore the highest form of victory. By the ceasefire, there was nothing grand left about the mission, and the contract ended in shambles. But the name offers a hint about the mindset.

The Pakistan elite till the mid-Seventies, when General Zia ul Haq led the coup d’etat that overthrew Bhutto, was a combination of Islamic tendency and Burra Sahib behaviour.

The bureaucrats and officers were Anglicized children of the British Raj, who ruled the country without much interference from the elected class, who might have brought the flavours and biases of the land into the higher echelons of Karachi, Rawalpindi (which was home to General Headquarters) and Islamabad. This conclave of privilege lived by the rules and etiquette of club life, spoke good English, and considered itself a benevolent necessity that was doing its patriotic duty by keeping the geographical unity of Pakistan intact. It paid occasional homage to Islam, when considered politically expedient, but not much more. Bhutto had the gall to tell the fundamentalists who objected to his preference for whisky, that he was only drinking alcohol and not the people’s blood. This class was socially, culturally and strategically attractive to its mentors in Washington and London, particularly in the Pentagon and Sandhurst.

That Pakistan is gone. It disappeared in stages, rather than overnight. Zia set the course during his long decade; he turned the annihilation of Pakistan in 1971 into a reason for reaffirmation of Islamicization, rather than its abrogation. His successors lost direction as new tides of religious fervour began to envelop the public discourse and then the polity. General Pervez Musharraf tried to reverse this process, but with the weakness of a dilettante. His heart lay in preservation of personal rule, not in bringing the nation back to its senses. He was the Bahadur Shah Zafar of the Grand Slam Sultans. The deluge did not wait for his departure; it came while he was in power.

Delhi has to deal with a radically different power structure in Islamabad. Those who claim office in Pakistan, even by democratic elections, know that survival is possible only through compromise with fundamentalists. That is one of the critical hurdles to any form of a peace process.

I cannot think of anyone in our country who would miss Bhutto, but spare a thought for Ayub Khan and his predecessors. It is no surprise that the General understood war much better than his arrogant civilian deputy.

By special arrangement with The Sunday Guardian.