How Gandhi and Rumi converged at a universal point, Sumit Paul explains

Now we’re fighting over temples and mosques and religious shrines. There’s a sharp religious divide in the society, much to the dismay of liberals. Rumi wrote nearly a millennium ago in Pashto, ‘Faqat dee bewaqoofaan zid abd-dairo-haram (Only fools spar over shrines)’. Gandhi wrote in the Harijan, ‘Fighting over temples and mosques is a national waste of time.’
Sumit Paul 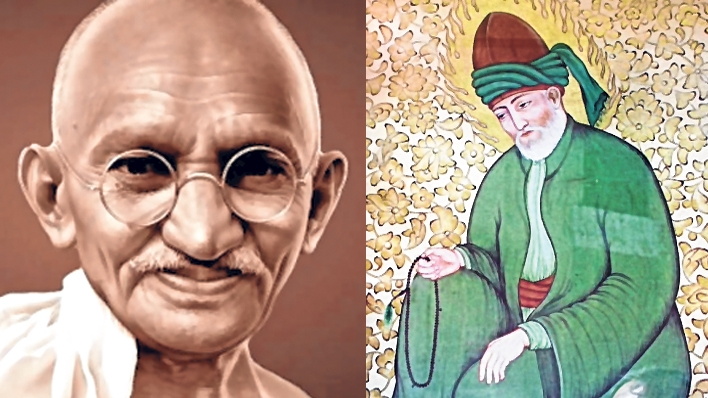 The two basic principles or ideals that guided Gandhi’s life were truth and nonviolence. For him truth was God and realising this truth as God was the ultimate purpose of life. He expounded the proposition that truth could be realised only through nonviolence: “Truth is the end and nonviolence the means.” Gandhi gave his own definition and explanation of nonviolence which transcended conventional understanding of the concept. For Gandhi nonviolence was not a negative concept meaning non-injury or non-killing but a positive one which meant love in the sense of selfless service of one’s fellow beings which included the entire creation. The essence of his arguments is that one must try to practise nonviolence in thought, word and deed and to organise all life activities on its basis, and that would bring in unprecedented and revolutionary changes in human life. The paper attempts to codify and put in perspective the defining features of nonviolence as understood, explained and practised by Mahatma Gandhi.

Gandhi’s non-violence or irenic (not ‘ironic’) philosophy is not a weapon of the weak. It’s the universal spirit or zeitgeist of mankind. Rumi says the same in Pahlavi: Nee az tashddud un’faqdaan mee az insaniyat (the absence of violence is the key to the survival of mankind). It’s really interesting to observe how Rumi and Gandhi converged at a universal point: the banishment of violence and the establishment of truth.

Rumi was a spiritual mystic and Gandhi was a socio-political mystic deeply soaked in spirituality and universal values. Rumi says in Turkish, ‘Naadish finz unghirat mee justajoo-e-haqfirat ’ (My quest for truth is a lifelong process). Gandhi’s truth was also a lifelong search, which didn’t reek of empty verbiage and inertia. ‘My truth is tireless’ said Gandhi. Rumi said in Persian, ‘Haq min parvaaz-e-musalsal (my truth is winged or ever-flying)’.

Here, drawing parallels to the two mystics’ non-violent philosophy, one gets to notice a strange mystical synchronisation (to quote C G Jung’s oft-quoted term) between the two greats. When Rumi was born in 1207 in Balkh, Afghanistan was in turmoil. When Gandhi was born in 1869, the Brits were oppressing and India was in doldrums. But both could see some semblance of sanity by the time they breathed their last. They didn’t resort to any form of violence, yet they succeeded. ‘Shaaz zin bad faahan un dushmanaan (I can’t even think ill of my foes)’: Gandhi.

Violence, bad blood, sectarianism and all sorts of ills have besieged mankind at the moment. Here come Rumi and Gandhi with their universality of ideas and all-encompassing nature of non-violence. Though Gandhi and Rumi may ostensibly appear to be Hindu and Muslim respectively, both went beyond religious ethnicity and sectarian stubbornness.

Rumi was born in Balkh in Afghanistan which abuts Eastern Persia. He wrote in Pashto, Dari (an Afghan variant of Persian), Pahlavi and Turkish and like Amir Khusro, Rumi could also empathise with the universality of an individual sans any religion or nation: Kaafir-e-ishqam Musalmani mara darkaar neest/ Har rage-jaan taar gushta, haajat-e-zunnar neest (I’m that infidel whose faith is love, I don’t want to be called a Muslim/ My every vein is a sacred thread, I don’t require Janeeu; sacred thread worn by Hindus)’.

Gandhi also had no religio-scriptural insistence, though he might appear to be a Hindu to an unversed person. Now we’re fighting over temples and mosques and religious shrines. There’s a sharp religious divide in the society, much to the dismay of liberals. Rumi wrote nearly a millennium ago in Pashto, ‘Faqat dee bewaqoofaan zid abd-dairo-haram (Only fools spar over shrines)’. Gandhi wrote in the Harijan, ‘Fighting over temples and mosques is a national waste of time.’

Gandhi drew daily inspiration from the Bhagwad Gita, the ‘Sermon on the Mount’ and Rumi’s ‘Guldasta’. He wondered, had warmongers like Hitler and Mussolini ever read and understood Rumi, the world would never have witnessed the two horrific World Wars and numerous other conflicts. It must be noted that it was a deeply spiritual Gandhi who coined the phrase ‘accidents of birth’ while defining an individual’s caste, country, faith and nationality.

How beautifully, the same was expressed by Rumi in one of his Masnavis, ‘Mizvat mee but-parastaan ift taayab niz-kaafiraan (I’d have been an idol-worshipper had I been born into the family of a soi disant infidel)’. In other words, Gandhi argued, ‘If one is born as a Hindu, is he a Hindu or does he happen to be a Hindu?’ So, why should one feel proud of being a Hindu or a Muslim? That’s a biological identity, not a spiritual or evolved one. Both believed that passivity should be at any price. Suffer dishonour and disgrace but never resort to arms. Be bullied, be outraged, be killed. But do not kill. Is the deluded world listening?

If Rumi called violence a mild disorder in divinity, Gandhi called it a slight degeneration in spiritual consciousness. Both were uncannily similar in their views. Both the masters believed that man was inherently good and vices and violence were just passing anomalies and fleeting aberrations.

Ergo, it’s time to understand Rumi and Gandhi. They complement each other and by combining their spiritual (not scriptural) world-view, we can make this world a desirable place to live in. Lastly, to quote Edward W Said, “Our barbaric times need Gandhi and Rumi all the more.”