Govt's obduracy has yielded a harvest of discontent 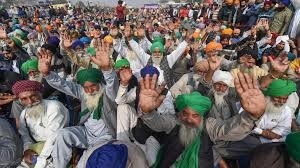 What was seen as a localised, Punjab-specific protest against the three new farm laws about agricultural trade and markets has snowballed into a national protest, with farmer groups from several states and national-level farmer alliances joining the agitation on the borders of Delhi. After three rounds of negotiations between the government and protesting farmers’ representatives last week, the standoff continues.

The government has said that it is keen on addressing the farmers’ grievances, to end the protests. It claims that farmers have misunderstood the laws which, it says, are for their benefit. But the farmers are firm in their demands – repeal of the three laws and making minimum support price (MSP) a legal right of the farmers. Since there is no meeting of minds between the two sides so far, farmers have intensified their stir by calling for a 'Bharat Bandh' today. The government has however, indicated its willingness to amend the laws to pacify farmers.

Essentially changing the rules around the sale, pricing and storage of farm produce, the new farm laws have been described by the government as ‘historic reforms’ in agriculture. The laws are supposedly aimed at freeing agriculture from the existing ‘archaic and exploitative’ market and trade practices. But farmers fear an adverse impact of the laws on agriculture trade and their livelihood.

Since the passage of the three laws in September, Prime Minister Narendra Modi has repeatedly said that they are a ‘protection shield’ for the farmers, but they are being misled by the opposition. Farmers have concerns about two issues. One, since the MSP is not mentioned in the law, they fear the assured option of selling in the APMC mandis may not be available to them in future. Two, they apprehend corporate exploitation, as the absence of regulation will lead to corporatisation of agriculture and farmers will lose their bargaining power.

The farmers’ fears are understandable. Their protests are the result of a lack of dialogue and trust between the government and farmers ever since the laws were first brought in as ordinances in June and were later passed in Parliament by voice vote, despite the Opposition MPs asking for a recorded division of votes, which the NDA was reportedly not in a position to win.

Farmers and their leaders say that they have been asking for dialogue and discussion with the Government for a long time. Its reluctance to talk to farmers may have been because it misjudged the level of their dissatisfaction with the bills and did not expect a large-scale agitation. When protesting farmers in Punjab blocked railway lines, the government responded by stopping trains from plying to the state.

When farmers moved from most of the railway lines, the Government probably saw this as a sign that the protests would fizzle out. But that didn’t happen and the farmers decided to take the protests to Delhi. It appears that the Government underestimated the farmers’ resolve, thinking it was only a Punjab issue. But the kind of support Punjab farmers have received from other states, leading to the encirclement of Delhi, has probably made the Government climb down from its earlier hard position.

A month ago, the Government made farmers’ leaders negotiate with a bureaucrat – Agriculture S ecretary Sanjay Agarwal; now a team of ministers and bureaucrats is doing the talking with farmer leaders. In the meeting last Tuesday, farmers’ representatives had unanimously turned down the Government’s proposal of a special committee to thrash out the differences and resolve concerns over the farm laws.

In the meeting last Thursday, farmers’ leaders put a five-point set of demands before the government. The farmers’ representatives have demanded a new law on MSP but their major demand is the repeal of the contentious three farm laws. The talks on Saturday were a washout. As the deadlock continues, farmers have hardened their stand and the Government too is also holding on to its stand of not rolling back the three farm laws.

Agriculture contributes about 15 per cent to India’s GDP but employs 55 per cent of the country’s workforce; at the time of Independence, agriculture accounted for around 54 percent of the GDP and employed 70 per cent of the workforce. So far, not much has been done to move the excess labour out of agriculture, though its share in national income has fallen significantly. Agriculture is not only a means of livelihood for over 50 per cent of India’s population, it is also a way of life for them.

Excessively dependent on farming for their survival, farmers are the biggest stakeholders in agriculture. Any change in the existing laws concerning agriculture – farm produce, trade, market, mandis, MSP and so on – needs their participation and agreement through a due process of dialogue and discussion. Laws can’t be foisted on them, just as they can’t be unilaterally imposed on industrial labour. If there is a minimum wage law for industrial labour, can farmers be faulted for demanding MSP for crops?

More than the industrial labour, farmers are a vulnerable lot. It is no secret that agriculture in India is highly un-remunerative. The annual rate of increase in farm income is barely a couple of percentage points. A crucial piece of data is the high percentage of landless labourers – 144 million or 55 per cent in 2011, against 27 million (28 per cent) in 1947 – which captures the growing level of impoverishment.

Another important statistic is the average size of land holdings, which is reducing sharply, while the number of people dependent on agriculture has burgeoned – 86 per cent of all landholdings in India are small (between 1 and 2 hectares) and marginal (less than 1 hectare). According to a 2015 study by Ramesh Chand, presently a member of Niti Aayog, a plot smaller than 0.63 hectare does not provide enough income to stay above the poverty line. This explains why most farmers are heavily indebted and many commit suicide.

But farmers are sceptical about allowing a greater play of market forces in the farm sector. They would rather prefer making the current system of farm trade through APMC mandis more efficient, transparent and remunerative. While the new laws do not abolish MSP or curtail procurement by the FCI, farmers fear that the laws are a cover to do away with all three. Given the serious trust deficit between farmers and government, the latter therefore needs to address farmers’ concerns on all contentious issues relating to the new farm laws.

The author is an independent senior journalist