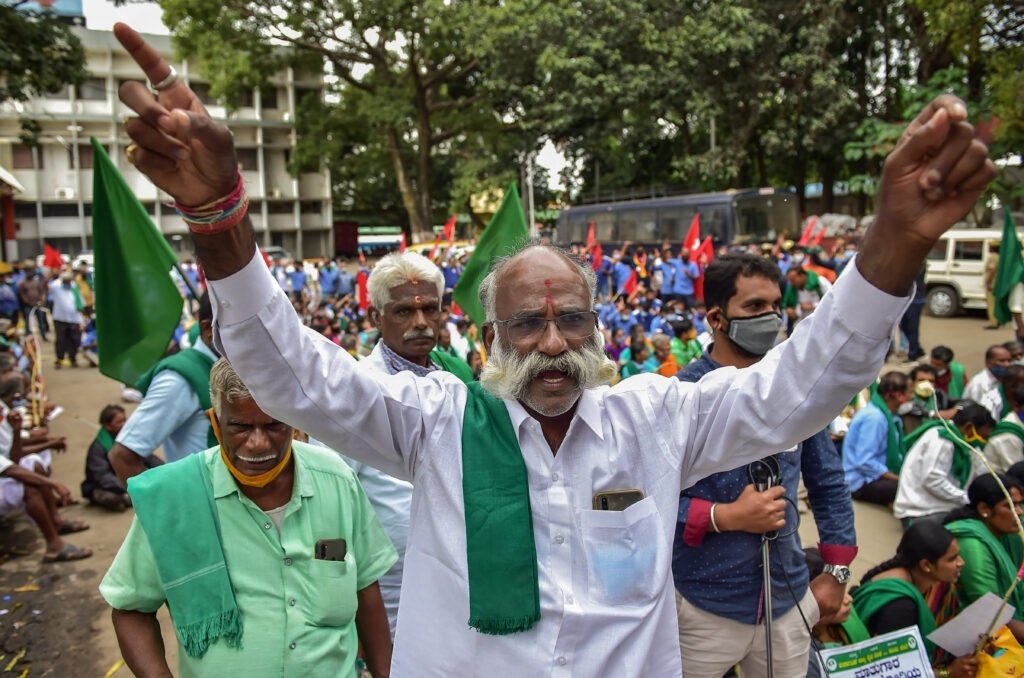 The ninth round of talks with protesting farmers was put off indefinitely, following Amit Shah’s meeting with their leaders on Tuesday evening. They were sounded out about the concessions the government was ready to offer but the initial reaction of the farm leaders was negative. They still stuck to the maximalist demand for the outright repeal of the three reform laws, a demand promptly rejected by the government. A day after they observed a token four-hour Bharat Bandh, the government released a compromise formula.

The draft proposal goes to considerable lengths to allay the apprehensions of the farmers regarding the continuance of the minimum support price mechanism for procurement of foodgrain, as also to further bolstering the legal status of the Agriculture Produce Market Committees. The proposal was sent to 13 unions of the agitating farmers. The offer to provide a legally binding commitment to continue with the MSP system in itself ought to have been enough to persuade the farmers to call off the stir. After all, initially this was their main demand. As the days went by, they upped the ante, as it were, seeking more and more from the Central government.

Having further gauged the extent of support the protesters enjoy outside of Punjab and to a large extent Haryana, the authorities might have decided to draw the line on the concessions to be offered, without repealing the reform laws. Yes, the government was willing to amend these laws to incorporate the few changes in order to assuage the feelings of the farmers, but no more.

For instance, the draft proposal offers to consolidate the status of APMC mandis, as well as to duly register private mandis that are likely to come up under the new laws. The offer also includes registration of traders operating outside the geographical limits of the APMC mandis and the payment of all applicable cess and taxes by them, the last to reassure state governments such as the one in Punjab that it would not lose revenue from agri marketing should the new laws come into force.

Another concession was to further increase the avenues for dispute resolution by allowing for appeal in a civilian court should farmers not be satisfied by the decision of a sub-divisional magistrate. In response, the farmer leaders called the proposals 'vague' and threatened to intensify the agitation. They threatened to block 'one road after another', beginning with the Delhi-Jaipur highway next week. Also, they threatened to picket the offices of the ruling BJP.

Meanwhile, a group of Opposition leaders called on President Ram Nath Kovind on Wednesday. In a memorandum supporting the farmers’ demands, they sought the repeal of the farm reform laws, claiming it was rushed through Parliament without a debate. As pointed out earlier, both Sharad Pawar and Rahul Gandhi had voiced support for the farm sector reforms in order to open them for wider private sector participation. A commitment to that effect was included in the Congress Party manifesto for the 2019 parliamentary poll. Indeed, a video clip of Kapil Sibal, then a senior minister in the Manmohan Singh Government, is available, wherein he is making a strong pitch for the very same reforms in a speech in the Lok Sabha.

Meanwhile, it seems that the channels of communication between the farm leaders and the Government are still open. And despite the peremptory rejection of the draft proposals for the resolution of the dispute, farmer leaders might still come round. Having got legal guarantees on the continuation of the MSP mechanism, they have little to fear from the likely entry of private players in the agri-market. The suspicion of an unfair advantage to private players who would function outside the limits of APMC mandis too is being allayed.

Farmers should accept the generous concessions and go back to their fields. Already into the 14th day, continuing the protest in the biting Delhi cold, and squatting on roads and open maidans is a health hazard. Besides, it diverts national attention and energy from more pressing matters. Stubbornness can recoil on the protesting farmers.