Ending acrimony with Nepal is a welcome act 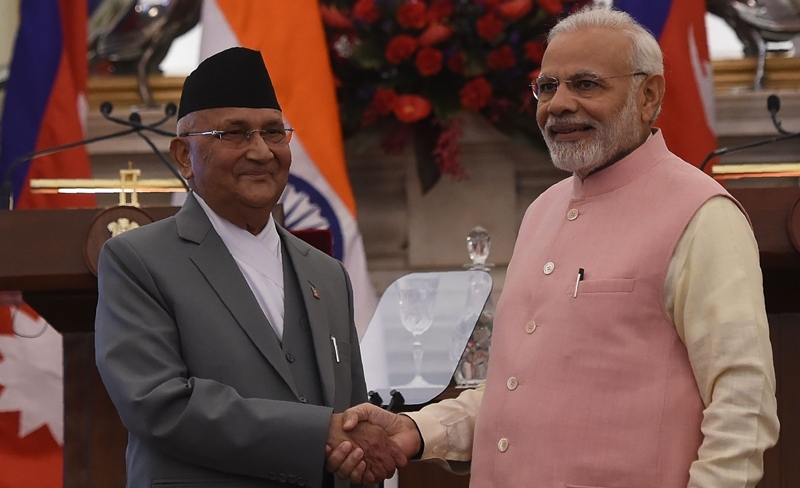 Prime Minister Narendra Modi’s efforts in pursuing a “Neighbourhood First” policy of trying to put bilateral relations on an even keel by ending the acrimony and bitterness of the past is a welcome augury with politicians in Kathmandu and a large section of the people in that country taking exception to New Delhi’s “big brother” attitude.

This time around during his third visit to the Himalayan nation since be became the Head of Government in May 2014, Modi has endeavoured to make amends by letting bygones be bygones. He is keen on changing the style and manner of conducting this country’s diplomacy with its immediate neighbours.

It is apparent New Delhi does not want Kathmandu getting close to China. This assumes importance given Beijing’s expansionist designs. Modi also took the opportunity of his official two-day visit to Nepal last week by combining pilgrimage. He offered prayers at the Ram Janaki mandir in Janakpur Friday last.

Modi, his host and Nepalese counterpart K P Oli jointly inaugurated a bus service from Janakpur to Ayodhya forming part of the Ramayan circuit. It may be recalled that the Nepalese have not forgotten the hardship faced by them for nearly six months in 2015-16 in the wake of an economic blockade against that landlocked country. Oli had spearheaded an agitation then opposing the blockade leading to the discontent among the Madhesis.

Modi, specifically drawing attention to the Indo-Nepal Treaty of 1950, is indicative of the ties being on the mend even as Kathmandu assured it will not allow its territory to be used against India.

On his part, the visiting dignitary spoke of the religious and cultural similarities as well as assuring all assistance in Nepal’s economic development. Modi steered clear of commenting on the political situation in Nepal being an internal matter of that country.

At the same time, he cautioned Nepal to guard against China’s call for an alliance of development. Smaller countries have invariably been weighed down by Beijing’s massive economic assistance leaving them with no option but to become satellites of that country.

Oli has been perceived as being anti-India when he attacked this country for imposing the blockade. In an oblique reference to the blockade, he said “man may come and go, but Nepal-India relations will remain for ever”.

He displayed warmth and ensured that Modi’s visit to Nepal remained smooth and trouble free. Kathmandu regretted that the assurances given by India in various spheres has not been fulfilled in a time bound manner.

Modi sought to allay any apprehensions that Nepal might have assuring that “India is ready to play the role of a Sherpa guide, taking the expeditionists from the base camp to the peak of Mount Everest”.

It was a direct approach at a public felicitation function in Kathmandu when Modi sought to put at rest all the misgivings. India also made it clear that it would be assisting Nepal in projects prioritised by Kathmandu.

Impartial observers in Nepal believe Modi’s interface with a wide range of political leadership and the tension between the ruling party and India is on the wane. Modi’s visit is seen as a culmination of a series of efforts by Indian officials since the December elections in Nepal to normalise relations with the UML.

Oli wasted no time in informing Parliament that there is no longer any need for bilateral ties with India to be affected by events of the past. The focus should be on deepening relations and development cooperation. Strengthening ties will be determined by the concrete resolution of disputes and the swift implementation of development projects that have been agreed upon.

Modi pointed out the bond between Indians and Nepalese transcends government-to-government relationship. There is an open border between India and Nepal, and above all else, Nepalese are free to work and stay in India. What is refreshing is that the two sides have agreed to fast track a host of bilateral projects which remained in limbo for long leading to substantial cost overrun.

India has to wake up to the realities of the situation that this country’s sluggishness in failing to implement projects in a time bound manner has prompted China in trying to make its presence felt in Nepal. It is time for India to play its part effectively in Nepal’s developmental endeavours as India also benefits from it.

T R Ramchandran is a senior journalist and commentator.