Turning the public into private, the Gandhi way 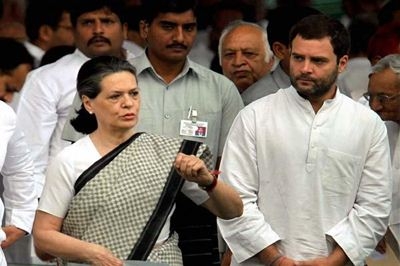 Fortunately, the Gandhis are not the sovereign. And we are not living in the middle ages. Her being someone’s daughter or daughter-in-law in democratic India would not grant her immunity from law, criminal or civil. Therefore, her brazen reaction to the summons from the court in what is called the National Herald case that she was Indira Gandhi’s daughter-in-law might cheer her demoralised troops, but it would certainly not absolve her from honouring the court summons.

India being a democracy, all citizens are equal in the eyes of law and guaranteed equal protection under it. Therefore, the right forum for her to defend herself is the court of law and not the wells of the two Houses of Parliament. Unfortunately, on Tuesday, when the newspapers carried bold headlines about the summons for the mother-and-son duo to appear in court on December 19, the sanctum sanctorum of democracy was most brazenly held to ransom by her storm-troopers, protesting the alleged authoritarianism of the government. How and why the government figured in a case involving court summons was never explained. That the Congress was isolated was clear.

Unfortunately, the authority of the presiding officers had been so emasculated that even a handful of members can hold the entire Parliament to ransom. Indeed, even among the Congress MPs, a large number realised that holding Parliament to ransom in the National Herald case was politically unwise. For, what do you tell people: that the courts were in cahoots with the ruling party? As several senior leaders of the ruling party pointed out, the summons was issued by the court and the government had nothing to do with their issuance. The right forum for the Gandhis was the court hearing the case. This simple truth ought to have been clear at least to a number of senior lawyers who people the Congress Party, though even a mofussil lawyer would have told this to the leaders of the country’s oldest party.

Holding the Parliament to ransom, to try and convert a private problem into a matter of national catastrophe smacks of an anti-democratic mindset. Surely, if she has a good case to defend she can always expect relief from the court. Trying to politicise the case would suggest that the Gandhis and others listed in the complaint filed by BJP leader Subramanian Swamy do not have tenable legal defense. It is notable that the case of cheating and breach of trust in the acquisition of Associated Journals Ltd, publishers of the now defunct National Herald, was filed way back in 2012, when the UPA was in power.

Swamy alleged that assets worth over Rs. 2,000 crores were misappropriated by the Gandhis and a few other close lieutenants by paying just Rs.50 lakhs. Seventy-six percent of shareholding of the new company was with Sonia and Rahul Gandhi whereas the remaining 24 percent was with Motilal Vora, Oscar Fernandes, Suman Dubey and Sam Pitroda. The AJL, over the decades, had acquired prime pieces of land in New Delhi, Mumbai, Bhopal, Indore, etc. at throwaway prices, ostensibly for publishing its now defunct dailies. Instead, the property in Delhi was rented out and it goes to the new entity controlled by the Gandhis.

Tax-exempt funds of the Congress Party were criminally diverted to create privately owned assets for the Gandhis and their proxies. While summoning them on Monday, the Metropolitan Magistrate Gomati Manocha said that from the complaint and the evidence so far, “ it appears that Young India Pvt. Ltd, to which the assets of the AJL were transferred, was in fact created as a sham or a cloak to convert public money to personal use.”

Given the high personages involved, no court would use such strong words without there being credible evidence of wrong-doing. The court further noted that the accused persons had allegedly acted “in consortium with each other to achieve the said nefarious purpose/design.” Such a strong indictment at the time of the issuance of summons ought to have led the Gandhis to try and prepare their legal defense. Instead, they decided to waste a full day of Parliament.

Since the key GST legislation is at stake, it is hoped that good sense will still prevail. It will be hard for the Gandhis to convince the nation that blocking the most progressive reform in the taxation system was a necessary price to pay for saving their own skin from the long hand of law. They can prove their innocence in the National Herald case in the court of law, not in Parliament. That way leads to anarchy and would signal a return to feudalism and worse. Both kings and commoners are answerable to the same law, the Gandhis ought to know.