Clouds of greed, mismanagement, and theft block the sun

Rooftop solar in Tripura was a success. Graft and political bonanza holds back emulation across the country.

On paper, the situation looks wonderful. IREDA (Indian Renewable Energy Development Agency) has plans to lend around $1.3 billion (Rs.100 billion) to the solar and wind sectors (https://mercomindia.com/ireda-%e2%82%b9100-billion-renewable-energy-2020/). But a reality check shows that it has disbursed only about $ 159 million (₹ 12 billion). In other words, just 10% of the money was actually used.

Then you learn that the Indian government will not be able to meet its target of 100 GW of solar by the year 2022. The country currently has about 37 GW of installed solar capacity as of March 31, 2020. It is doubtful if it will be able to add 63 GW in the next 30 months.

You also learn that except for the accidental implementation of rooftop solar in Tripura (http://www.asiaconverge.com/2019/03/biplab-kumar-deb-has-big-plans-for-tripura/), the government is extremely reluctant to promote rooftop solar. One good reason behind this unwillingness could be the politicians love for giving out subsidies year after year, abetting power theft, and retaining the power of enforcing power cuts and load shedding (http://www.asiaconverge.com/2017/12/sabotaging-rooftop-solar-and-employment-generation/). Just look at the chart alongside. Solar costs have been tumbling. Thus, the incentive for opting for solar is tremendous. The solar potential of the country is immense, almost double the total installed capacity of power generation in the entire country – even after 70 years of development.

Also, look at the job creation potential that rooftop solar holds out. This is more significant when you take into account the job losses caused by COVID-19 and the almost universal agreement among industrialists that at least a third of the existing jobs are likely to vanish forever (https://www.ncbi.nlm.nih.gov/pmc/articles/PMC7267282/). India needs an industry which can be a big employer of skills at all levels – right from the semi-skilled to the extremely well-skilled. Rooftop solar offers that opportunity. It needs fitters and fabricators. It needs people who know how to service batteries, and it needs people skilled in electronics for invertors and micro-grids. The potential for job creation is around 80 million in a few years (http://www.asiaconverge.com/2020/05/post-covid-19-rooftop-solar-deployment-holds-the-key/). And if the government adopts the cluster approach – with each cluster being under a private entrepreneur – the government could encourage economic activity in rural areas as well.

Then look at some other numbers. In 2015, this author predicted that the government’s UDAY (Ujwal DISCOM Assurance Yojana) would not work (http://www.asiaconverge.com/2017/04/uday-and-politics-of-appeasement-and-largesse/). Credit Rating agencies like CRISIL on the contrary were ecstatic about it (https://www.thehindubusinessline.com/economy/crisil-welcomes-uday-package-for-power-discoms/article7855894.ece). At that time, the aggregate discom losses stood at Rs.3.15 lakh crore. This loss was kept aside as a separate (UDAY) vehicle, ostensibly to reform the discoms. Today, the same CRISIL admitted on May 6 this year that aggregate external debt of state owned discoms will increase to pre-UDAY levels of Rs. 2.6 lakh crore by the end of this fiscal (https://www.crisil.com/content/dam/crisil/pr/press-release/2017/12/square-one-discom-debt-to-reach-pre-uday-levels-this-fiscal.pdf).

Had the government listened in 2015, India could have been spared a bill of Rs. 2.6 lakh crore and could have reduced its import bill as well. It could also have created 80 million jobs. Will someone be sacked for this reckless decision?

Over and above all this foolhardiness, the DGTR (Director-General of Trade Remedies) will begin oral hearings, through digital video conference on June 11, on whether the crippling 25% safeguard duty (SGD) on the import of solar cells into India should be continued. Even if they are discontinued, do not forget that a standby provision of import duties has already been included in the last Union budget. The government appears to be determined to pour good money over bad. Someone is evidently not keen on promoting solar. 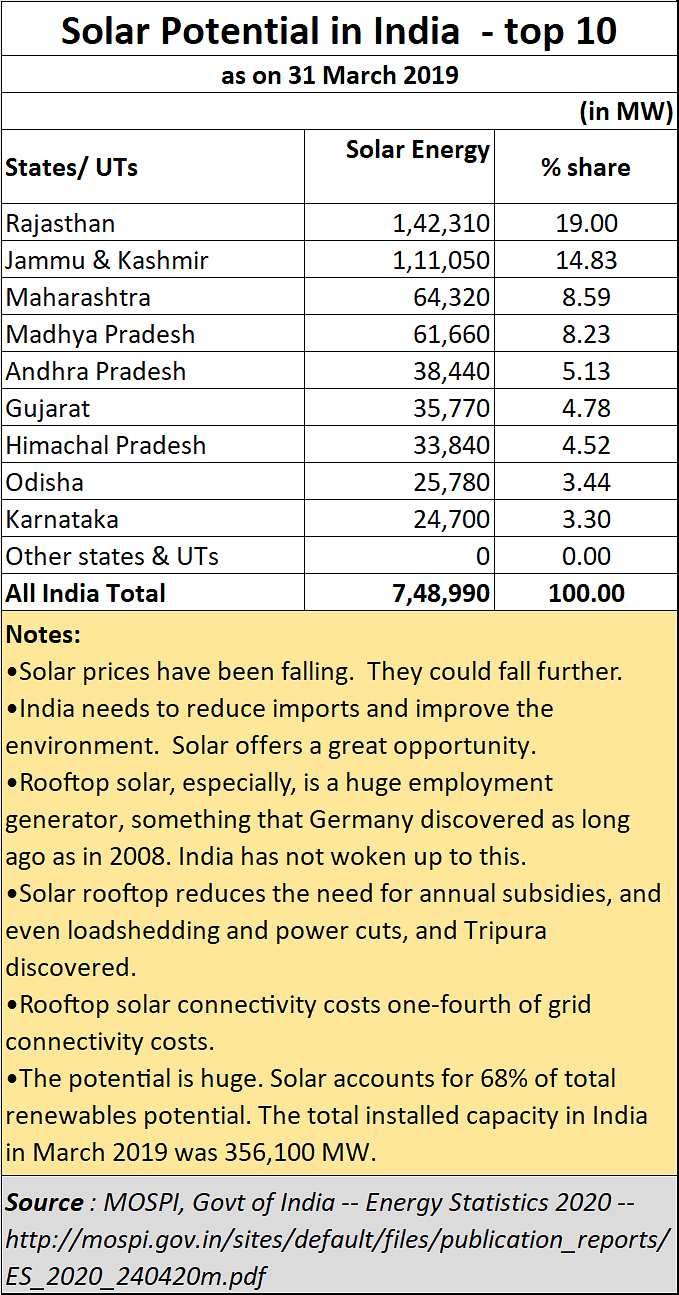 Moreover, rooftop solar, as Tripura discovered cost only Rs.50,000 per household, one-fourth the cost of grid connectivity. As a result, the 50,000 rooftop solar installations in Tripura resulted in no financial losses, no subsidies, no shutdowns, and no power-cuts. As Swaminathan Aiyar pointed out recently, “The latest auction for 400 MW of solar power, including storage, has been won by ReNew Power with a levelised tariff of Rs 3.52/unit over 15 years. The equivalent thermal power tariff would have been closer to Rs.4.5/unit” (https://timesofindia.indiatimes.com/blogs/Swaminomics/cleaner-and-now-cheaper-solar-power-beats-coal/). If the consumer pays less, the state plays less, and the losses are not there, why has the government been waiting? Someone must love the graft and the political bonanza much more than love of the country!

At these terrible times when the economy is slipping, can the prime minister set in and stop this erosion, waste, and criminal neglect of rooftop solar? Will good sense prevail?

HomeAnalysisClouds of greed, mismanagement, and theft block the sun