Change in the face of backlash 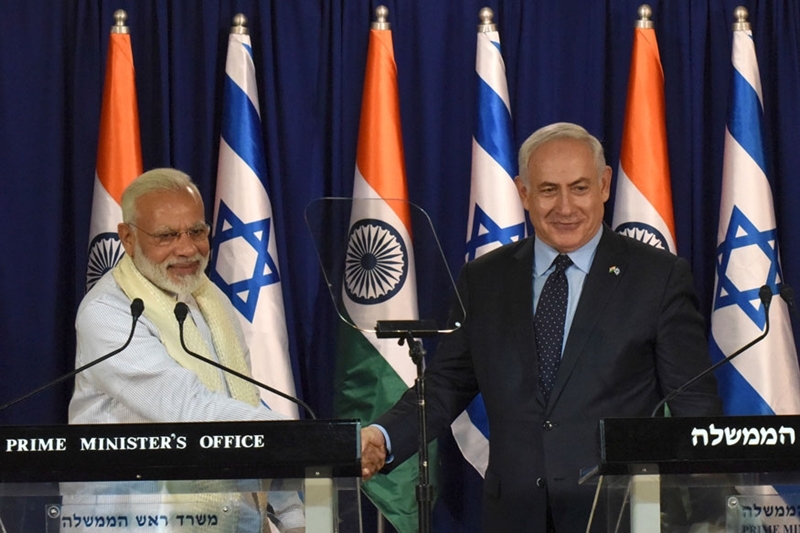 FOR the longest possible time, Indian diplomacy has run scared of facing the truth over Israel because of the fear of a Muslim backlash at home and recriminations against migrant Indian workers in the Islamic nations of West Asia. Someone had to take the bull by the horn and end this nonsense.

Franklin Delano Roosevelt’s remark that Americans had nothing to fear but fear itself has a large measure of universal relevance. This is no least in India where the smokescreen of ‘democracy’ is often used to justify institutionalised lethargy, intellectual laziness and even condone colossal incompetence. The argument that India is essentially a civilisation that plods its way over the centuries, preferring familiarity to disruption and radical change, was often used in the past by imperial administrators to justify passive governance. The dusty files in the archives are replete with interesting intellectual battles between the development evangelists and those who preferred to let people discover their own preferred pace of change.

On the face of it, the balance of opinion appears to have tilted quite decisively in favour of the pro-changers. For the past few decades at least, elections have been fought between political parties promising parivartan or change. The plea for a steady course may have intellectual resonance but the mood of voters is by and large one of colossal impatience. Governments at both the local and national level have been voted out for apparently ‘doing nothing’ – a shorthand for being cautious – and, conversely, the appeal of those promising change has always been high. In personal life, Indians tend to be socially conservative but when it comes to the political sphere, they seem to be attracted to the promise of change. At the same time, quite paradoxically, change invariably invites fierce resistance and often provokes a backlash that governments dread.

The fear of triggering a backlash has been one of the biggest deterrents to change. Last week witnessed a very successful visit to India by the Israeli Prime Minister Benjamin Netanyahu. It was a visit that a large number of people felt was highly overdue. Israel may be a tiny country, perhaps even equal in size to some of India’s larger parliamentary constituencies. Yet the popular respect it commands is disproportionate to the area it covers in the world map. This may have partly to do with Israel’s status as the custodian of an ancient Jewish civilisation and partly with its doughty battle to survive while being surrounded by implacably hostile countries. Israel today epitomises a gritty determination that is a source of colossal admiration. It is a friend worth having.

Yet, it is worth looking at the snail’s pace in which India-Israel relations have developed. Israel and India came into being as sovereign nations in 1948 and 1947 respectively. Yet, diplomatic relations between the two countries are barely 26 years old. It has almost taken that time before the bilateral relationship was able to move from an embarrassed below-the-radar approach to a point where the Israeli Prime Minister can be ceremonially greeted at Rashtrapati Bhavan and taken in a cavalcade on the streets of a major Indian city.

Why didn’t this happen earlier? I am not one of those who believe that every Congress leader of consequence is inherently hostile to Israel because of its Palestinian policy. A small minority of Congress leaders may echo the tasteless remark by a top CPI(M) functionary that Netanyahu was an unwelcome guest in India. However, far more than any natural empathy towards the rag-tag Palestinian state that exists in Ramallah, it was the fear of a Muslim backlash that prevented any open friendship with Israel. This despite the known fact that Israel has been among the most consistent of India’s friends in international for a, something that the foes of Israel in the Islamic world can hardly boast of. The decades of bankrolling and support for the Palestinian cause does not appear to have earned India any additional diplomatic goodwill when it came to the crunch.

What was significant about the Narendra Modi government was its impatience with the hypocrisy that governed India’s Israel policy. It had become clear, at least since the Menachim Begin-Anwar Sadat understanding at Camp David in 1979 that the reality of Israel was now undeniable in West Asia. The policy of total destruction of the Zionist entity may still be an attractive slogan in some radical campuses and among Islamist groups who are as viscerally anti-Semitic as the Nazis in Germany were. However, this does not translate into actual diplomacy, not least because most of the Arab potentates have strong backchannel links with Israel. More to the point, there is also a grudging acknowledgement in West Asia that Israel’s dominance over Jerusalem is almost irreversible. There is, at best, a remote possibility that a future Palestinian state may enjoy a symbolic stake over the city that Jews, Christians and Muslims hold sacred.

For the longest possible time, Indian diplomacy has run scared of facing the truth over Israel because of the fear of a Muslim backlash at home and recriminations against migrant Indian workers in the Islamic nations of West Asia. Someone had to take the bull by the horn and end this nonsense. The Modi government took the step in 2014, culminating in the Netanyahu visit last week. There may have been a few angry editorials in the Urdu press, some inflammatory sermons in mosques, an isolated black flag demonstration or two in some cities and some snide comments about the Modi hug. However, in the main, the visit was a spectacular success. If tomorrow, India starts making preparations to shift its Embassy, now in Tel Aviv, to Jerusalem – as I believe it should – the protests will be insignificant.

The lessons should be obvious. The veto of a handful of activists should not deter governments from doing what is right and what is in the national interest. Fear should never be the reason for inaction.

The author is a senior journalist and Member of Parliament, being a Presidential Nominee to the Rajya Sabha.