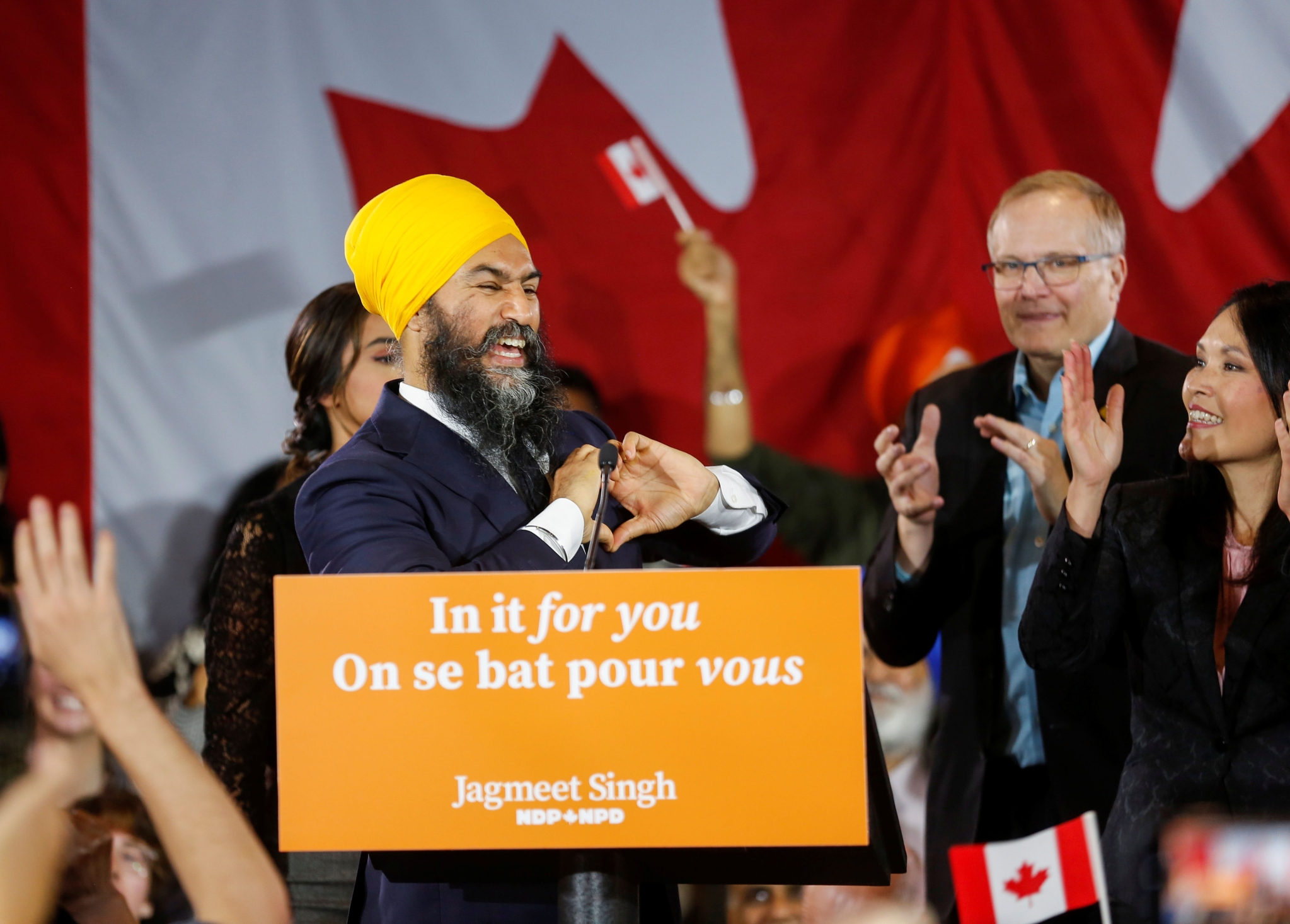 While Americans of Indian origin still wait for a vital role in the US politics, despite some headway made in recent years, it is in its northern neighbour, Canada, that NRIs have  taken  their rightful place in Parliament and provincial legislatures. Sikhs, one of the early migrants to the sparsely populated country, have toiled hard and long to work their way up in various walks of life in Canada. Given their significant numbers, and the increasingly fragmented Canadian politics, the number of Sikh-NRIs who wield considerable influence has shot up enormously. Monday night’s election results not only saw a record 19 turbaned candidates with origins in Punjab winning the election, but a small party headed by a Sikh is now set to play a crucial role in government-making following the failure of Prime Minister Justin Trudeau to win a clear majority on his own.

Trudeau’s Liberal Party won 157 seats in the 338 House of Commons, down from 177 in the previous election. The second placed Conservative Party polled more popular votes but won fewer seats, a peculiarity of the Canadian electoral system. It is the smaller parties such as the Greens and Jagmeet Singh’s New Democratic Party Trudeau will have to turn to  for support for continuing for the second straight term as prime minister. Curiously, the Left-leaning NDP’s sole Sikh MP is its leader, while 18  Sikhs have been elected on  the tickets of rival parties. NDP’s 24 MPs could bolster the minority Trudeau government but it remains to be seen how far its ideological platform would be adopted by the minority government. Ideologically-driven liberals and leftists do not make for a smooth sailing, given vast differences in the economic and social spheres.

In the case of Canada, unlike many other countries, environmental concerns influence a majority of voters. While the NDP seeks stronger action on climate change, Trudeau had imposed a small carbon tax in his previous stint which he may have to increase further in order to retain the support of the NDP and the Greens. The Conservative too are no less strong on checking global warming. In the 2015 election, Trudeau had emerged as a relatively young leader, promising change and progressive policies. However, a couple of controversial decisions diminished his popularity. On the eve of the poll, old images of a young Trudeau surfaced with his face darkened with makeup, causing critics to accuse him of racism. It might have been an error of judgement portraying a blackface in a gathering of young friends, but it cast a shadow over his re-election bid. A bigger controversy concerned his bid to intervene in a regulatory matter about one of Canada’s biggest infrastructure and energy companies. It allegedly paid bribes to win a foreign contract. Bribing to win foreign contracts is a criminal offence both in Canada and the US. Trudeau tried to influence the attorney general  to take a lenient view, given that the firm employed tens of thousands of Canadians and had otherwise a clean record at home. The concerned law officer resigned, making public the undue influence by the prime minister. Come to think of it, both these controversies would have been non-issues in India. Of course, President Trump would have dismissed them as ‘fake news’. But Canadian politics is far more evolved.

While Trump is a climate change denier, Trudeau has had to commit himself to vigorous action on climate change. He had faced severe criticism for giving the go-ahead to the Trans Mountain oil pipeline expansion programme in spite of a strong opposition from the Greens and the aboriginal people. Trudeau in his election campaign sought to mend his image on climate change, pledging to plant two billion trees. Also he committed to ensure a net-zero emissions regime by 2050. Environmental concerns dominating the politics of Canada may be the future for all other western countries, though unfortunately Trump’s US, the world’s biggest polluter by some distance, remains a denier. The election showed a clear rural-urban divide, with the Liberals doing rather well in urban areas while the Conservatives scored big in rural seats. Also, the Liberals with 33 per cent popular vote, lower than the second-placed Conservatives, are set to rule for another term while those who together polled 66 per cent of the popular vote will sit in the Opposition. Maybe the democratic world needs to consider moving to the proportional representation rather than the current first-past-the-winning post system.