Can farm unions damage BJP’s chances of winning UP polls? A L I Chougule explains

While the incoming UP election has given a fresh lease of life to the farmers’ protest and the unions have expressly called on farmers to defeat the BJP in the 2022 assembly polls, the major anxiety for farmers is their declining political influence in the social, economic and political landscape and control of the agrarian economy in the state
A L I Chougule 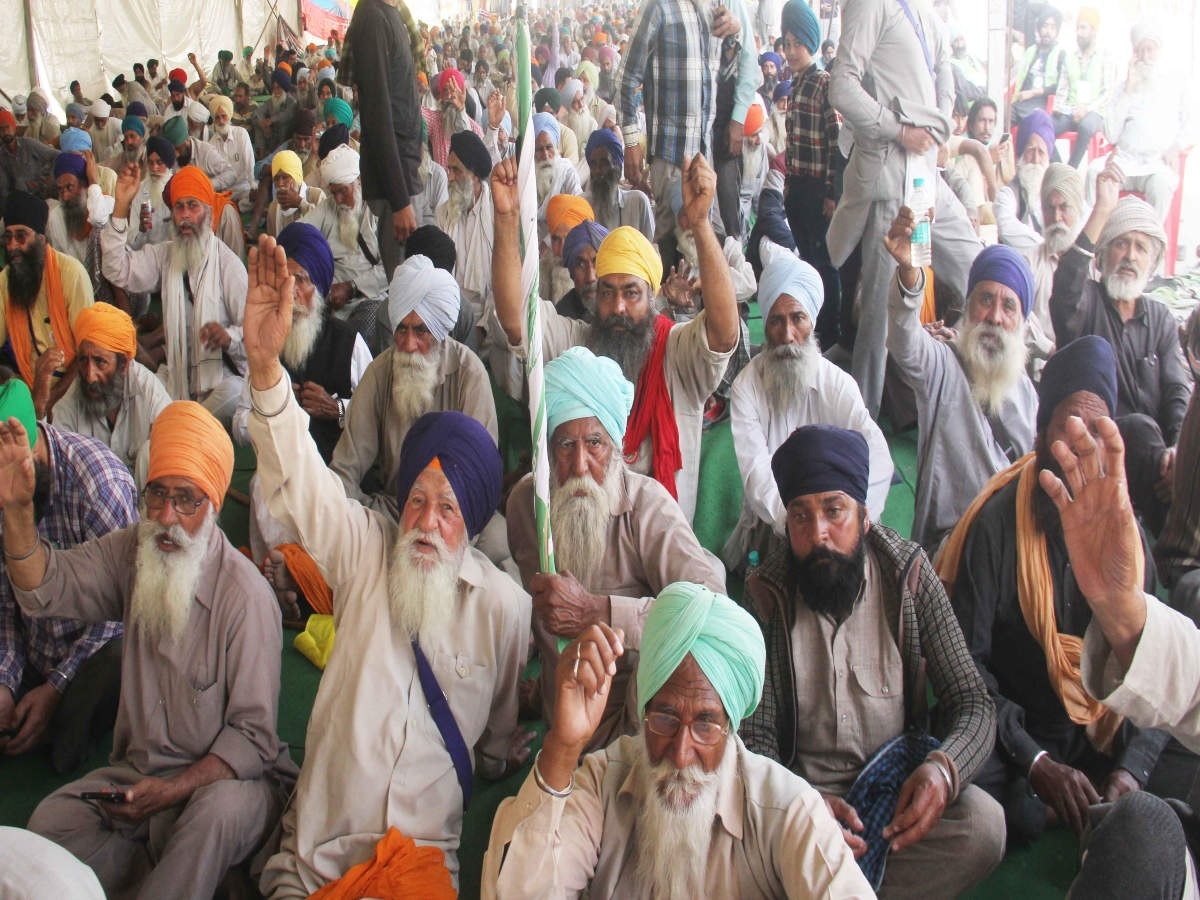 The forthcoming assembly elections in Uttar Pradesh have finally been quantified for the first time this election season, with the release of an ABP/C-Voter pre-poll survey recently. The opinion poll’s prediction is that the BJP, led by chief minister Yogi Adityanath, along with the NDA’s partner Apna Dal of Anupriya Patel, will return to power for a second term with a comfortable majority. Though the BJP-plus is projected to lose 62 seats from its 2017 tally of 325 seats, it will however, remain well above the majority mark with 263 seats. The survey assumes that the Akhilesh Yadav-led Samajwadi Party (SP) will ally with the Rashtriya Lok Dal (RLD), while the Congress and Mayawati’s Bahujan Samaj Party (BSP) will contest alone.

In such a scenario, the SP-RLD combine is projected to see an increase of 65 seats, going up from 48 in 2017, to 113 in 2022. The Congress and the BSP are, however, projected to lose two and five seats respectively, going down from seven to five and 19 to 14. The others are likely to gain four seats, and go from four to eight. Given the importance of UP polls before the next general elections, the prediction of a BJP victory has created a buzz around the assembly election in India’s largest and most populous state.

Political analysts view the UP elections as a semi-final to the grand finale of Lok Sabha polls in 2024, as a win for the BJP in UP is likely to provide a fillip to the party’s prospects in the next general elections. Besides, it would also cement Yogi Adityanath’s position in the BJP as the acknowledged Number 3 leader after Narendra Modi and Amit Shah, which may give wings to his prime ministerial ambitions.

While the SP emerged as the single largest party in the panchayat elections held in April this year, thus raising the party’s hopes that voter dissatisfaction due to the alleged mishandling of the second Covid wave and the resultant economic suffering would help it dislodge the BJP in 2022, a triangular contest with the BSP still retaining around 16 per cent vote share, as the C-voter survey suggests, makes the task quite daunting. In the 2017 election, the BJP’s vote share was 39.7 per cent, while the SP garnered 21.8 per cent, the BSP 22.3 per cent and the Congress 6.3 per cent.

In the forthcoming election, BJP-plus is projected to get 41.8 per cent votes, while the SP-plus is projected to accrue 30.2 per cent, a gain of 6.6 per cent over 2017. This means the SP needs a big swing of about 20 per cent votes in its favour to defeat the BJP, and the latter must witness a decline of 10 per cent in its vote share. This is easier said than done, unless the contest turns bipolar, making the BSP and the Congress irrelevant in the eyes of the voters, an unlikely scenario.

All of this shows that Akhilesh Yadav and his party have a stiff challenge ahead of them and they will need to put in a lot of efforts to defeat Yogi and his party. However, there is another dimension to the UP elections, which is the tussle between the farmer unions and the BJP. The question is whether the farm unions can damage the BJP and chief minister Yogi Adityanath’s chances of winning the Uttar Pradesh elections.

At a recent massive Kisan Mahapanchayat in Muzaffarnagar in western UP, the farm unions protesting against the Central government’s three farm laws announced that they would campaign against the BJP in the 2022 assembly elections in the state to defeat the incumbent Yogi government. Reacting to the Mahapanchayat, the BJP called it an “election meeting” and alleged that it was driven by political motives. BJP’s right-wing supporters on social media also tried to give it a communal colour.

Who shapes the narrative?

In the run-up to the assembly elections, the major tussle between the BJP and farm unions would be over who gets to shape the narrative. Obviously the farm unions would want the focus to remain on agrarian politics and farmers’ issues. The BJP, on the other hand, is likely to focus on Hindutva, Ram Mandir, love jihad and law and order, besides emphasising on development.

In the clash of narratives, the BJP will have an edge, given its expertise in communal polarisation. This will make the farm unions’ efforts to keep the election narrative around farmers’ issues a difficult task, given that with increased communal polarization, the political landscape of west UP is not what it was two decades ago.

The communal polarisation that took place in the aftermath of the 2013 violence in Muzaffarnagar led to a massive consolidation of Jat votes behind the BJP. This vote bank, experts believe, would be the main bone of contention between the BJP and farmer unions. The RLD, which is likely to contest the election in an alliance with the SP, will be the BJP’s main rival in this region. Reports suggest that the RLD is gaining ground in the region among Jat farmers but it remains to be seen how far the farm unions will be able to convince the farmers to vote against the BJP.

Another major problem the farm unions are faced with is the geographical limitation of their agitation, which is largely confined to western UP; this is said to be a major limitation to the possible impact of the farm agitation in the UP election, as the effect of their mobilisation in western UP is unlikely to spill over to other regions like Bundelkhand, Awadh and East UP.

While the incoming UP election has given a fresh lease of life to the farmers’ protest and the farm unions have expressly called on farmers to defeat the BJP in the 2022 assembly polls, the major anxiety for farmers is their declining political influence in the social, economic and political landscape and control of the agrarian economy in the state.

Unlike in the 1970 and 1980s, when the farmers’ movement was effective and it could rally other groups to its cause, today, it remains isolated. This explains the Central government tough stand against the farm agitation and its refusal to accept their demand to repeal the contentious new farm laws. This also explains why the farm unions may not be able to substantially influence the outcome of the UP elections which the BJP and Yogi Adityanath are projected to win.