Not the usual RSS chest-thumping 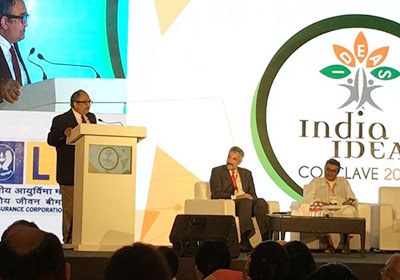 The on-going tussle between Left, Right and Centre — which marred the Bangalore LitFest last fortnight — underlines the need for a ‘uniform civility code’. The increasingly ugly social media brawling and random provocation by the loony fringes on both sides eliminates any possibility of meaningful dialogue. In all the clamour, the irreverently termed “knicker thinkfest” in Goa last month (the India Ideas Conclave), passed virtually unnoticed.

The event deserves mention, if for nothing other than the absence of a chest-thumping, nationalist, anti-Islamist narrative, which might have been expected of an RSS thinktank. The view was nuanced, leavened with a conscious effort at accommodation. If the hawks, notably Canadian-Pakistani scholar Tarek Fatah, castigated governments for their lack of spine vis-à-vis Islamist radicalism, others like writer Sadanand Dhume advocated zero tolerance for acts of violence and bigotry against minorities. Disappointingly however, no alternate to the intolerance narrative emerged. Too much was left unsaid.

If the objective was to de-escalate tensions, it failed. But it did serve a useful purpose, as an exercise in introspection. Far more interesting than the sessions themselves were the discussions on the sidelines of the conclave, in which three broad themes emerged. First, there was a consensus on the need for recalibration, after 18 months of NDA rule. The triumphalism of 2014 resulted in far too much aggression and tepid efforts at coalition-building, to the detriment of governance.

Second, there was a general view that the Right in India lacks a culture of true scholarship. The sangh ecosystem neither promotes scholarship, nor does it not produce artistes: poets, lyricists, singers, musicians, film maestros. As a senior BJP functionary put it, “We claim Bhimsen Joshi as our own. But did we appreciate him? I heard an anecdote about him meeting the then sarsanghchalak, M S Golwalker, who asked him what he did. He replied that he was a singer. Guruji said it was nice he sang, but what did he do?”

India Ideas Conclave deserves mention, if for nothing other than the absence of a chest-thumping, nationalist, anti-Islamist narrative, which might have been expected of an RSS thinktank. The view was nuanced, leavened with a conscious effort at accommodation. Disappointingly however, too much was left unsaid.

Third, the handling of the intolerance discourse had left a lot to be desired. Instead of being defensive, reactive and silent until forced to speak, the government should have taken the initiative to nip fears of bigotry and oppression in the bud. Even if it means suspending elected representatives for making provocative remarks. Instead, the government waffled and in the process, lost the perception battle.

Perhaps free-wheeling discussions were possible because the loony fringe had not been invited! The mandatory RSS presence was registered by number 3 Dattatreya Hosabale, arguably its most articulate and charismatic face. English was the langue du jour and scholars, authors and commentators of undeniable credibility participated.

It would have been too much to expect participants to refrain from Left-bashing. Some, like Madhu Kishwar, said it was a relief to be able to articulate their views freely without fear of violating left-wing standards of political correctness. Thus, Dhume could say the Left was in denial vis-à-vis terrorism and Kishwar could lament the domination of English as the language of academia. Journalist Sultan Shahin could warn against Wahhabism eclipsing Sufism, of Rumi and Baba Farid vanishing from even Sufi madrasas in India. Tarek Fatah could urge Indian Muslims to follow the way of Mirza Ghalib and Bulleh Shah rather than Wahhabism. Writer Patrick French could call for according respect to those who had chosen to return their awards as a mark of protest against government policy (or lack thereof). Indic economics could be discussed without being dubbed obscurantist. BJD MP Jay Panda could freely advocate direct elections to the Rajya Sabha, thereby curbing its veto over critical legislation.

The most significant takeaway was the obvious distinctions within the Right. The schism in views on poverty reduction – market versus welfareism – is as evident in the NDA regime as it was during the UPA’s tenure. On radicalism and freedoms, moderate elements are advocating a more nuanced approach. For instance, they openly support the de-criminalisation of section 377.  can get away with saying that this amounts to “India being disrobed by western culture” and animadvert against Valentine’s Day and the social media. But the government, emphatically, cannot.

The Left’s dystopic vision of pervasive anti-intellectualism and repression is perhaps overstated, judging from the liberal views expressed in Goa. On the other hand, unless these timid moderates assert themselves and speak up against the extremist views and actions of those claiming affiliation with the RSS, a civil and constructive dialogue cannot materialise.